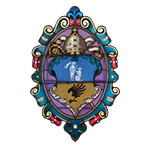 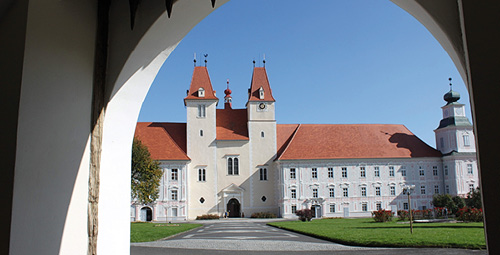 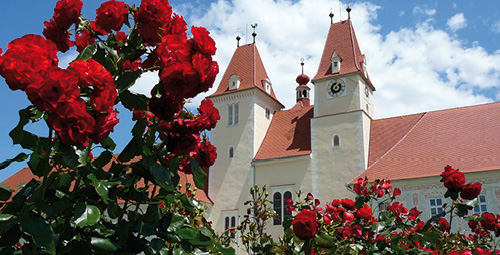 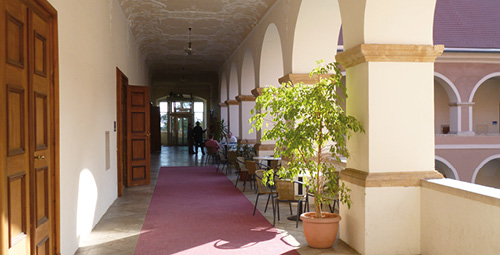 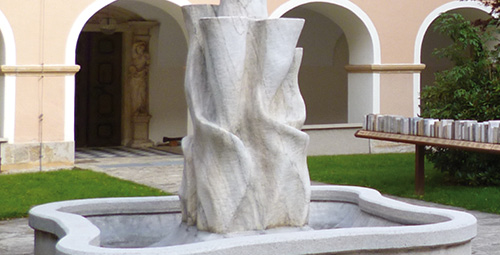 Vorau Abbey, nestled in the beautiful landscape of the so-called "Joglland", was founded in 1163 as a center of prayer and pastoral care, education and culture. It is the only Augustinian monastery that still exists in Styria.
The  Abbey provides a spirtual focal point for the Vorau canons, who devote themselves, among other things, to pastoral care in the deanery of the same name. The magnificent abbey church invites both canons and parishioners to reflection and  community worship.  Vorau Abbey is famous for its large number of towers--more than any other Austrian monastery. Its impressive architecture, exquisite library, baroque collegiate church, profusely illustrated sacristy and wonderful grounds in the middle of nature are all good reasons for a visit. The Abbey's Education Center provides adult education opportunites within monastic atmosphere, as well as warmly welcoming private overnight guests. With its 20 rooms, the Baroque Hall, the Princes' Chamber and three seminar rooms, the Education Center offers a place to feel comfortable in a unique setting. 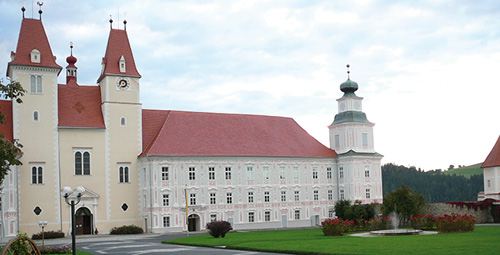 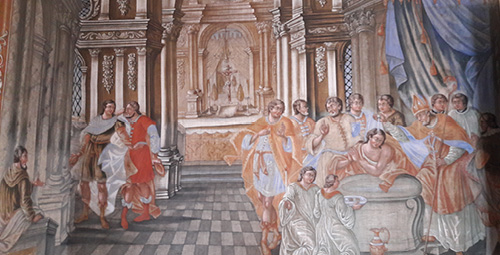 The towers of the collegiate church date to the Middle Ages, while the rest of the church was built in 1660-1662 according to plans of Domenico Sciassia. It was then redesigned beginning around 1700 by the imperial engineer Matthias Steinl in the style of the Viennese High Baroque. Particularly noteworthy are the pulpit built in 1706, which shows scenes of Jesus teaching, and the high altar constructed from 1701 to 1704, depictting the assumption of the Virgin Mary, for whom the church is named. Both were designed by Matthias Steinl and constructed by the sculptors J.F. Caspar and G. Niedermayr. The church thus represents a Baroque artistic synthesis.

Sacristy
The sacristy is considered the artistic pearl of the monastery.  It is richly decorated with frescos completed between 1715 and 1716 by the abbey's resident painter, Johann Cyriak Hackhofer and represents his masterpiece. The walls are devoted to illusionistic scenes from the suffering of Christ, including the foot-washing, blood-sweating, the castigation, coronation with thorns, carrying the cross and crucifixion. In "Descent into Hell" devilish figures and other infernal monsters are depicted surrounded by flames, personifying human vices such as avarice, fornication, arrogance, drunkenness, slander, etc. 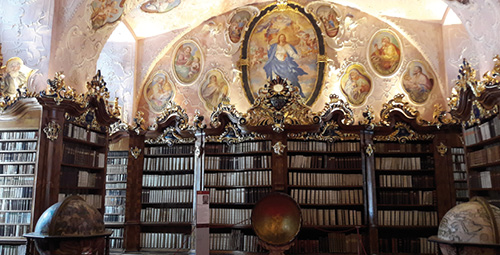 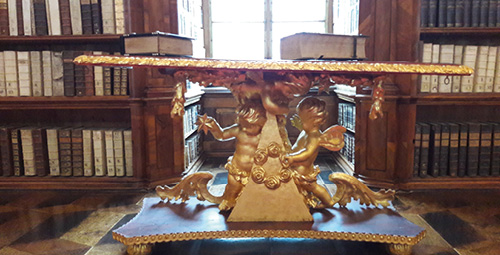 The library and archives of the monastery span a millennium of bibliographic and cultural history and include documents, paintings, collections, 416 manuscripts, 206 incunabula and a further 40,000 printed books covering various branches of science.
Contact & Info
Vorau Abbey
A-8250 Vorau 1
Phone: +43 3337 2351
pforte@stift-vorau.at
www.stift-vorau.at

OWING TO THE CURRENT CORONA CRISIS, THE ACTIVITIES OF THE ABBEY GATE, INCLUDING THE GIFT SHOP, WILL REMAINED CLOSED PRESUMABLY UNTIL EASTER 2021.  MONASTERY TOURS ARE PLANNED TO RESUME AFTER THAT TIME .